Quartz is a unique material, due to its high purity level of SiO2 and to its mechanical, electrical, thermal, chemical and optical properties.

Quartz is an excellent electric insulating material and presents the following electrical properties:

The main characteristic of fused quartz glass under the thermal point of view is its low thermal expansion coefficient (5.5 x 10-7 cm/cm°C). The material has an exceptional thermal stability compared to traditional glass. If fused quartz glass is heated up to 1100°C and kept at this temperature for about an hour, it will not change color.
Quartz glass has also an excellent thermal shock resistance: if the material is warmed up to a temperature of 1100°C, then suddenly colled down to 20°C and if we repeat this procedure for three times, the piece of quartz glass does not break.

Fused quartz glass is a solid material at ambient temperature, however at high temperature it behaves just like any other glass type, it does not have a specific fusion temperature and it softens at about 1630°C acting like a plastic material. This state transformation lasts for a wide range of temperature and it is characterized by the changing of viscosity with the variation of temperature.

The following table shows the main parameters of the mechanical properties for each quality of quartz produced by Helios Quartz.

Fused Quartz’s optical properties depend on its transparency level and on the production method and they are far better than the standard glass because quartz glass has a much higher purity level.

The graph on the right shows the trend of the index of refraction according to the wavelength.

The graph below shows the transmission spectrum according to the wavelength. 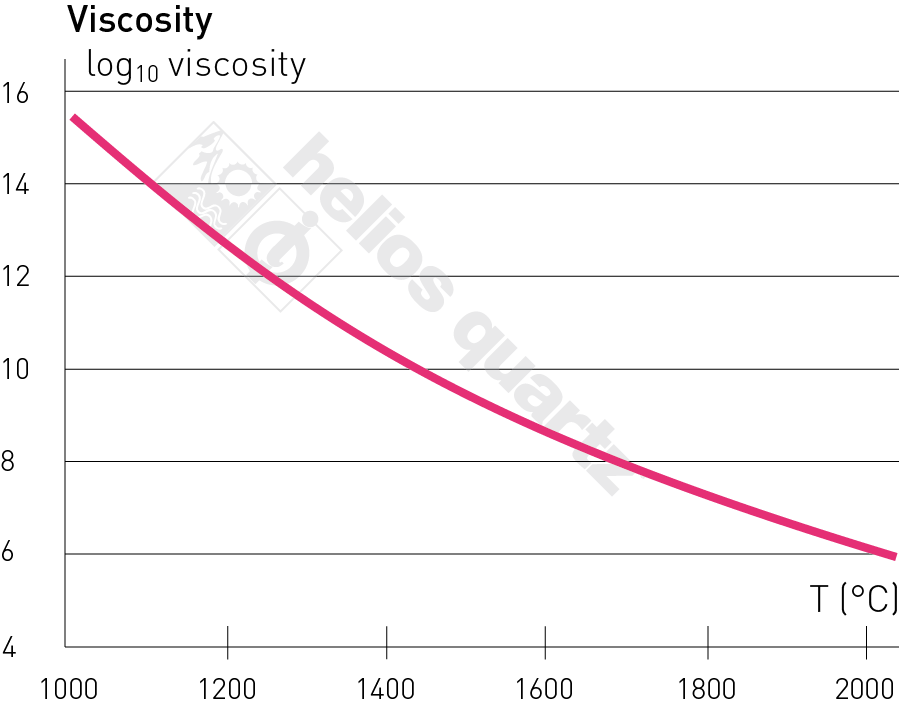 not in a solid state anymore but it slowly flows. The higher the temperature gets, the faster the quartz flows. Viscosity is greatly influenced by the presence of impurities inside the material.

The graph on the right shows the logarithmic trend of viscosity according to temperature.

The process of devitrification happens after the material has been exposed for a long time to very high temperatures and the presence of impurities makes the process faster. Devitrification process starts on the surface and this is the reason why it is better to accurately clean the outside part before the heat process starts.

Fused quartz glass is inert to most of chemical components; for this reason the material is widely used in the chemical industry and test laboratories. Alkalis agents attack quartz glass causing and accelerating the devitrification process. Hydrofluoridic and phosphoric acid are the only compounds able to etch the material even at the low temperature.